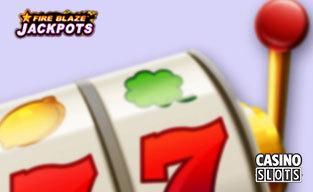 Playtech, the world’s largest software provider traded on the London Stock Exchange Main Market, never ceases to amaze discovering new ways to boost the level of excitement even in the audience of seasoned players. Shortly after this giant added a precious gem called Rarestone Gaming to its already striking collection of studios, we were presented with a unique fusion of reels and thrills definitely able to make some noise.

What’s so great about the Fire Blaze series?

The answer is very simple: four fixed Jackpots that in combination with a pretty extensive betting range can generate truly impressive winnings. Since the Grand top prize is set at 2000x total bet and the maximum stake is €500 per spin, it’s not hard to figure out the tremendous payout - €1,000,000!

We bet, you can’t wait to get the details so keep reading because we’ve done a bit of research and now it’s the time to spill everything out! Themed around myths and legends of the thriving in every sense of this word ancient civilizations, all slots in this series have a standard 5x3 playfield enhanced with high volatility, different special symbols, extra features, and a solid RTP that goes over 96%. Even though the upper border for wagers befits the popular motto „Go Big or Go Home“ intrinsic to high-pullers, these slots are designed with all punters in mind, so you can start spinning the reels at just €0.25 per round.

The Fire Blaze Respin feature works the following manner: while the Grand prize can be won by hitting 15 scatter symbols (except in Tsai Shen’s Gift that gives players more options), the Mini, Minor, and Major prizes are awarded randomly during respins.

Want to know the best part? The hefty trio can fuel your balance multiple times within the feature!

The first slot of the series launched on the state-of-art Playtech’s platform, this beautiful 50-pay line tribute to clever and prosperous Aztecs that conjures up a mysterious atmosphere that has always surrounded their history. The queen herself plays the role of a wild able to substitute for all other icons except scatters and bonus symbols. Represented by a magnificent pyramid, the scatter pays regardless of pay lines and activates 8 free spins when at least three appear on the screen. This feature can be re-triggered.

Acting as a bonus symbol, the golden Sun appears on all reels to brighten up your day with multipliers and bring you a prize of up to 50x your total bet. Landing 6 or more Suns will also trigger the Fire Blaze Respin Feature, which delivers either a cash prize or a Jackpot Star icon for every Sun hit during the respins. When the bonus is complete, any held Jackpot Star will transform to award Mini, Minor or Major top prizes while to take home the Grand Jackpot, you have to cover the whole screen with Sun symbols.

Launched together with Sky Queen, this 50-line trip to ageless Egypt is very similar to its Mesoamerican counterpart in terms of appearance and reel layout. Available across all mobile devices, just like other releases from the series, it has an identical set of special symbols (a wild daughter, a scattered pyramid, and a bonus Sun) and extra features, therefore with just a little help of Lady Luck, you will get a chance to take advantage of at least eight enthralling treats on the house or one of the four Jackpots.

Although keeping pace with such stunning ladies is not an easy task, this all-mighty warlock does a great job offering an advanced free spins feature. Namely, activated by hitting at least three scattered castles, this extra contains wild multipliers able to bring you up to 16x stake. In addition to that, if a bonus symbol represented by a Crystal Ball appears on the middle reel during free spins, it can multiply your prize for up to 50x. Everything else is pretty much the same except the fact the 5x3 grid of this slot has 30 fixed pay lines.

In this Asian-themed story adorned with famous Chinese lucky charms, Rarestone goes back to a 50-line plot but spices it up by Stacked wilds, which can take you to the Moon! And that’s not all, because once three or more scatters land on the reels and trigger the Mooncake bonus, you will be offered to pick one of the four delicious cakes to reveal not less scrumptious prize: bonus spins with added wilds or the Fire Blaze Respin feature.

Another 50-line tribute to the rich Eastern culture, this visual masterpiece makes one step forward in taking the whole plot on an entirely new level of bonus spree. Besides generous multipliers brought by bonus Pearls, it lets you witness incredible metamorphosis performed by the Roaming Mega Reel – revealed Mega symbols during the Free Spins feature award extra bonus rounds or the desired Fire Blaze Respin!

And the most freshtastic thing? In contrast to other titles from the series, Tsai Shen’s Gift gives two different opportunities to win the Grand Jackpot: by landing 15 Pearl bonus icons or by hitting a combo of 6 Pearls and 1 Mega Pearl!