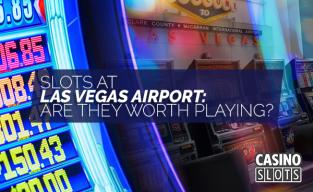 Endless rows of sleek cabinets thoughtfully arranged on the floors of McCarran International Airport have a bad reputation among the gambling community.

Although it is hard to imagine something that says „Welcome to Fabulous Las Vegas“ better than well-familiar cheery sounds of slot machines, numerous experts and seasoned players agree on one point: one-armed bandits at the airport should be avoided.

If you wonder, whether all these people have a good reason to say so, the answer is „yes“ and it lies in a low average payback percentage. It is well-known to everyone, that airports are a way past expensive, therefore not only food and drinks but also entertainment cost there more than usual.

Compared to machines scattered across the City of Lights ...

... the airport counterparts return to players significantly less money. According to the Nevada State Gaming Control Board, on the Strip, you can expect an RTP of 88.38% on 1¢ slots and 92,43% on 1$ machines, while on Boulder Strip it would be 90,38% and 96,13% respectively.

Even though the gambling report does not show RTPs for airport machines specifically, several surveys performed by gaming gurus suggest that McCarran slots offer an average RTP that ranges between 85% and 87%.

Well, multiple experiences of punters confirm this idea, therefore the place is perhaps good to kill a couple of hours before the flight or survive a long stopover, but if you want higher chances to win, you will get far better treatment even at the spoiled by tourists venues located on the Strip and in Downtown.

Needless to say, games in online casinos have the best RTPs and the return of any particular title is never a secret.

So, Is It Impossible To Win At Vegas Airport? 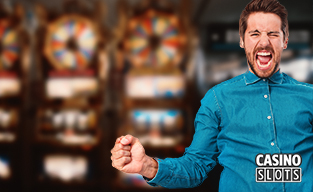 Oh, no! The venue has made a bunch of Jackpot winners up to date and, obviously, is not going to stop with this practice!

It comes as no surprise, that worldwide popular IGT’s Wheel of Fortune series is the one to blame for the majority of big winners. In 2005, it paid off a whopping prize of $ 3,9 million to one truly jammy visitor.

When it comes to more recent happy moments ...

In 2017, the same hot ticket created by IGT surprised a California woman with a $1.6 million Jackpot. Just in case you are curious, she placed a $5 bet on a machine located in the C Gates.

It’s safe to guess, none of them were worried about missing flights and lots of related paperwork.

Comps and Other Perks

Besides the high house edge, there is something else that players see as a major downside of airport machines: spinning their reels won’t bring you any comp points.

Well, unlike both land-based and online casinos, the company that operates slots at the airport simply doesn’t bother to retain loyal customers. Taking advantage of the location, which guarantees a stable source of new visitors, they have no need to establish rewarding programs and VIP clubs.

Long story short, if you want to get more value for your money, just walk pass flashy airport arcades and head to Fabulous Vegas. A trip to the gambling capital of the world is still a distant dream?

That doesn’t mean you cannot enjoy the benefits of high-class fun, all the more so, they are accessible in full from your tablet or smartphone. Fortunately, online gambling platforms have no shortage of various slot bonuses, just be sure to choose one with achievable wagering requirements and fair time frames.