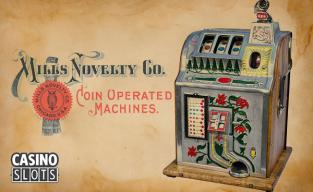 Slot machines in the USA, fruit machines in the UK or pokies in Australia - more than a million one-armed gambling devices all over the world generate almost 70 percent of total casino revenues nowadays. Nevada along has nearly 200,000 these amusement appliances.

So, how did everything start?

Well, Bavarian-born American Charles August Fey is recognized as the man who invented the first slot machine, at least in the modern connotation. But not many people know, that almost fifteen years before the “great breakthrough” primitive coin-operated gambling machines already delivered unpretentious fun to the visitors of saloons.

Believe it or not:

as early as in the 1880s the humble precursors of present-day slot machines could be seen on wooden bars in the popular establishments. Of course, they had a different mechanic and didn’t look exactly the same, for instance, it could be two toy horses racing after a coin was put in the machine.

It‘s interesting, but at that time most of the vendors paid off prizes in refreshments, cigars or even special metal tokens, which, in their turn, could be bartered for drinks or snacks.

Already by 1888, there were slot machines that gave payouts in coins. In just six years, Charles Fey, a mechanic from San Francisco, would assemble his first coin-operated machine, and one year later, in 1895 he would present to the community the revolutionary 4-11-44.

this top-paying combination awarded winners with $5 big money at the end of the 19th century!

Proved as a real smash hit at local places, the 4-11-44 served as a prototype for more units produced at the brand new Fey’s factory. Time flies, and in 1898 the talented designer built the Card Bell, the first slot with three reels and automatic cash payouts. It was a pioneer in every sense of the word, which introduced a handle that set the reels in motion and playing cards suits to form winning poker hands.

Undoubtedly, the most famous of Fey’s slot machines is the Liberty Bell. Made in 1899, just one year after the card version, it was enhanced with well-familiar and still much beloved today bells and horseshoes. Lining up three bells meant the highest payout.

Inspired by the huge success of his masterpieces … 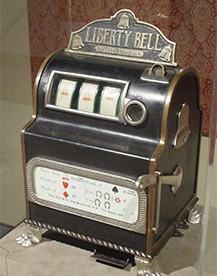 … Charles Fey has produced more than 100 Liberty Bell machines till 1906. Unfortunately, the devastating earthquake that struck San Francisco in April of that year, destroyed thousands of homes and took hundreds of lives, left only 4 machines undamaged.

Life is not always easy

In 1909, soon after one of the deadliest earthquakes in the history of the United States, slot machines were banned in the Golden City. Did that stop Fey and his competitors (many copied the Liberty Bell but the Mills Novelty Company was the most successful) from manufacturing their products?

No, of course, not. They just discovered the way to outwit the low by building no coins machines – all payments went through a saloon counter. Soon most one-armed bandit factories changed their locations, a big number found their new home in Chicago.

Where did the fruits come from? 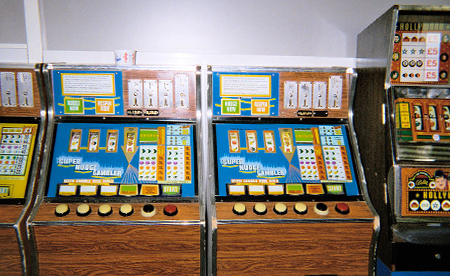 Used for the first time by the Industry Novelty Company in 1909, these omnipresent symbols were brought into play to serve a very prosaic idea and help circumvent legal restrictions. Called its slot machines chewing gum dispensers, the company replaced card suits with various fruits to imply different flavors of this soft sweet.

In all fairness to the inventors …

… they did build a few devices that gave out gum.

Naturally, people from the Mills Novelty Company didn’t wait for long and copied the plot in the following year. But do not hurry to disapprove their intentions, because by adding a picture of a gum pack on the reels they presented the world a glorious BAR symbol we know today!

Plus, all punters definitely owe them one – in 1916 they invented the Jackpot! Yes, certain combos simply made all the coins come out of the machine.

Being way past popular during the 1920s, as well as the Great Depression of the 30s, slots welcomed the relegalization of gambling in Nevada in 1931 and continued their march across the globe after World War II.

Electromechanical in the 1950s, today they are empowered by solid-state electronics that allows fascinating performances and tremendous progressive jackpots. Needless to say, land-based and online casinos simply cannot be imagined without vast collections of slots.

But at the end of the day, state-of-the-art or old-fashioned, one-armed bandits represent the quintessence of uncomplicated yet thrilling entertainment.