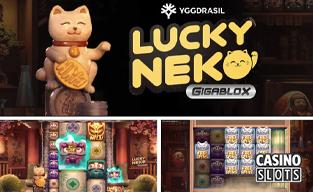 Gigablox™ is the latest reel mechanic developed by award-winning slot maker Yggdrasil Gaming. Just as the name of this innovative feature suggests, it’s all about gigantic symbols that serve one purpose: to generate truly massive wins.

Debuted in Lucky Neko online slot, the impressive blocks of matching icons overtake the reels literally, and if in the base game they come in 2x2, 3x3, and 4x4 sizes, during free spins Gigablox™ can also appear as enormous 5x5 or 6x6 chunks.

One of the most prominent online casino software providers, Yggdrasil is constantly looking for new opportunities to amaze its worldwide audience with even more thrilling and engaging video slots.

At the very end of last year, the company introduced its highly-unique Splitz™ mechanic and launched this January Temple Stacks became the first game to offer players a fresh innovative excitement with 248,832 ways to win. By the way, just recently, the Splitz™ collection was replenished with futuristic Neon Rush, which besides its fun and visual-heavy theme, lets punters hit up to 25,000x bet across a 5x3 grid enhanced with 10 pay lines.

What Is Gigablox & Which Online Slots Have It? 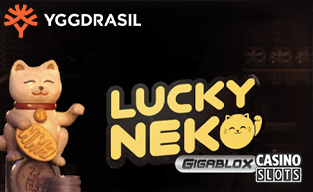 Back to Gigablox™, the first slot to offer all buffs of spinning adventures a huge winning potential of big blocks is Lucky Neko scheduled to hit the floors of online casinos at the end of June.

Inspired by the rich Japanese culture, this immersive story is chock-full of Daruma dolls and Maneko cats, which are a lot more than just cute souvenirs – at least it holds true for this one of the newest slots! Modeled after Bodhidharma, a monk who is believed to be a founder of Zen Buddhism, the Daruma is a highly esteemed symbol of perseverance and luck in Japan.

Despite their goofy look...

...Daruma dolls created by the talented designers from Yggdrasil can work magic shaking the entire shop while landing on the reels to complete winning combinations. Famous beckoning felines, in their turn, are wild and able to substitute for all regular symbols to contribute the same goal of striking a maximum win capped at staggering € 695,300! 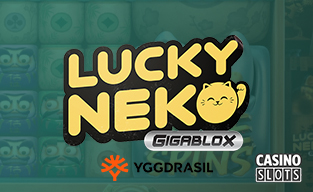 This game is a true slot masterpiece built on iSENSE 2.0 Plus – an Yggdrasil’s ground-breaking platform revamped and launched in Summer 2017 to enhance user experience. The list of upgrades includes Retina Display Screens and Force Touch support, ensuring incredibly crisp visuals on HD screens. Needless to say, the minimalistic UI for both mobile and desktop devices has been designed to meet the latest trends in app developments.

Unique in many ways...

...Lucky Neko greets players with a 6x4 grid that has enough space for 40 fixed pay lines but during free spins, the reels expand to a 6x8 configuration equipped with 85 pay lines. To hit a win, punters have to aline between 3 and 6 matching symbols while the feature is triggered by landing at least 5 free spins icons, each awards one treat on the house.

Every session will also reveal one random symbol to become Blessed, which means all wins that include the latter will get a 5x multiplier, bringing punters closer to the max win of 6,950x stake. The great thing is Gigablox™ appears on the reels at each spin both in the base game and in the free spins. Additionally, every free spin icon hit in the feature delivers an additional bonus round.