There are casinos running in the modern era with thousands of online slots. To stand out in such an environment, you can't rely on the pure number of titles that you have produced. While that would have worked in the early days of the industry, things have progressed to the point that quality is what really gets you noticed, and Bla Bla Bla Studios has quality in spades.

Sorry, there are no casinos by Bla Bla Bla Studios available in your country. Try these casinos instead.

This company has been around since 2012, and in the time that they have had their doors open, they've established a tremendous reputation for being a top-notch provider. Their offices are in Cape Town, South Africa, and they employ designers from all kinds of different backgrounds in everything from UNREAL to Unity and everything in between. This is the source of why their games are so good.

A great-looking game doesn't mean that it's going to be well-received by players, but it's an important place to start if you want to stand out in the modern era. With that having been said, Bla Bla Bla Studios has some of the best-looking titles that you're going to find anywhere.

A key part of why this is comes down to the fact that they don't think of themselves within the confines of the online casino world. Instead, they consider themselves a game developer on a larger scale, and that type of perspective means that they're competing with how games look overall, not just within the gambling industry. This type of perspective is something that other developers could definitely learn from.

Almost all of what they have available fall under the slots genre. However, within this genre, they make sure that the gameplay of what they offer is just as solid as the look and feel of the game from a graphical standpoint.

One way they do this, which accounts for a lot of how good their titles are, is that they make sure every feature and the overall style of gameplay for the slot matches up with the theme of the game. Along these lines, you come away from playing their slots feeling like you've had an immersive overall experience instead of a bunch of disjointed features thrown together with some wins here and there in between feature triggers.

It's hard not to love what Bla Bla Bla Studios brings to the table. They definitely know how to take care of their players with an awesome overall selection, even though they don't have the most titles of any game developer out there. Even with that taken into consideration, they are definitely in the upper tier of software companies in the online casino industry from a quality standpoint, and we're sure that they'll continue to get even more popular with players over time because of that. 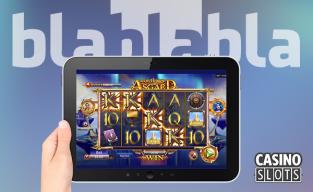 Fortunes of Asgard is a new slot from Bla Bla Bla Studios that features Norse God Thor and Hellia, Goddess of the Underworld battling it out over 5...