With their headquarters in Malta, Green Jade Games runs out of one of the biggest hotbeds for online casino companies in the world. They have been in operation since 2017, and they are known for being a game development subsidiary of the MRG Group, the same company that owns Mr Green Casino and a variety of other brands. This subsidiary was created to develop exclusive titles for their sites to offer players something fresh and new.

Sorry, there are no casinos by Green Jade Games available in your country. Try these casinos instead.

The MRG Group owns and operates Green Jade Games. The former is known for their extensive selection of extremely popular casino brands, and they wanted something a bit special to set them apart from other operators. As such, they opened Green Jade Games with the express focus of creating particularly high-quality games that pushed the envelope on what high-end games were meant to be in the industry.

The aesthetic aspects of casino games in today's market are extremely important. With many casinos having thousands of titles to pick from, players can't go through and try out each and every one to see what they like. Instead, they have to go by how the games look and if they're drawn in by them initially before they even have a chance to explore the gameplay elements. That's a big part of why they put so much effort into making sure their games look and feel amazing, even at first glance.

With that having been said, they don't ignore gameplay at all. This company focuses on piling in a lot of features into their titles in a way that fits the concept they're building around, and that creates a style of play that resonates with virtually everyone.

Any software company that wants to be competitive has to have a strong mobile presence, and you'll find that with their games, most of which are mobile-compatible slots. The whole idea here is that you can take your games with you wherever you go to play on your smartphone or tablet, and they're designed in a way that has them adjust to your screen size for easy play.

Android, iOS, Windows Phone and Blackberry operating systems are all compatible with the mobile versions of all games produced by this company.

Green Jade Games produces titles that are so good that it really shows you that they're owned by a parent company that's serious about making a mark on the industry. Their portfolio isn't the largest, but it doesn't have to be when you're putting out titles that are as ambitious as theirs are. 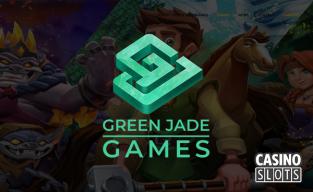