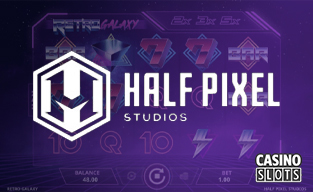 Newly appeared on the iGaming scene software providers usually choose to introduce themselves in traditional style, presenting us with a snapshot of their education, careers, capacities, and goals. At least, it’s what we are accustomed to.

People from Half Pixel Studios are different, sticking out of the crowd from the very outset. They prefer to remain a mystery, or, if you want, a complete enigma, letting their games speak for themselves. Well, if you think about it, it makes perfect sense as it’s hard to find a better way to the hearts of slots buffs than through an awesome game.

And it’s easy to believe that their slots are really good, otherwise, Microgaming wouldn’t be interested. Yes, you read it right – Half Pixel is one of the latest additions to the extensive range of studios that provide exclusive content for the legendary gaming giant from the Isle of Man.

Sorry, there are no casinos by Half Pixel Studios available in your country. Try these casinos instead.

Does Half Pixel Studios Provide Slots For Microgaming?

This slot maker managed to get the attention of a broad gambling audience in August 2020, when Microgaming launched its debut spinning adventure called Retro Galaxy. Interestingly, the partnership between the two companies was covered by a veil of secrecy, with details remaining unknown to the public, or at least, it was the case at the time of writing this review.

In contrast to Gold Coin, Pear Fiction, SpinPlay, Northern Lights, Foxium, Bla Bla Bla, and other partners of the Mega Moolah creator, Half Pixel Studios doesn’t belong to the RNG Foundry, a famous gaming accelerator established in association with London-based Velo Partners for earlier stage investment opportunities. We’re sure that one day we’ll know much more about the talented team behind this brand, but now let’s focus on what they can offer to slot fans.

Launched as one of the Microgaming’s novelties for August 2020, Retro Galaxy is a high-volatility slot that takes punters on an exciting retro-space adventure spiced up by a huge winning potential of 7,300x the bet.

A fabulous combination of the futuristic environment (nicely complemented by an authentic soundtrack) and well-familiar lucky red sevens, bars, and diamonds styled to match the amazing punk era, this game has a standard 5x3 playfield enhanced with 243 ways to win. Wilds and scatters are part of the offering, but they do not show up on all reels. Scatter icons appear on reels 1,3, and 5 while wild symbols can be seen on all reels except the first one.

The highlight of this slot…

…comes in the form of the Rolling Reels™ feature equipped with Multiplier Trails, which is available both in the base game and during free spins. If you have already played Absolootly Mad: Mega Moolah or some other title with this perk, then you’re well aware of the benefits it offers.

The Rolling Reels™ feature is triggered by any triumphant hit, except those which contain scatters. After you get paid, the winning symbols will be removed from the grid, so the icons from above will replace them to fill the empty positions. If you strike a win, the entire process will repeat, boosting your chances to grab a prize without paying for another spin.

What’s more, during the base game, the multiplier increases with each rolling reel, therefore if at the first win your prize is multiplied by 2x, at the second win it’ll be tripled while after the third win you will be treated to a 5x multiplier.