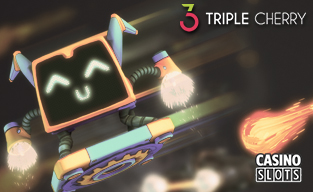 Triple Cherry is one of the many up-and-coming software providers but one of the few that have managed to make quite a splash in the iGaming circles. Founded in 2018 by a group of industry veterans who in their own words „live casino slots“, this Valencia-based studio produces truly unique titles that simply stun with crispy 3D graphics, amazing themes, and exciting twists and turns packed in immersive mini-games.

Just one glance at the Triple Cherry’s portfolio is enough to figure out that this developer is not interested in making yet another all-look-alike story. Quite on the contrary, it strives to achieve excellence in every element of the game, from superb visuals and sound effects to top-notch reel mechanic and innovative bonuses.

Rocket Ride To The Top

The constantly growing team of seasoned pros is led by Juan Antonio Galindo, CEO and co-founder of Triple Cherry, who previously worked in the business development area of Red Rake Gaming. Other co-founders of the company, Josevi Pons, Carles Pons, and Daniel G. Blázquez, are known as the creators of Akamon, a social game maker sold to Canadian Imperus Entertainment for $25 million.

Since its inception, the brand has entered a number of strategic partnerships to expand its global reach, striking deals with Hub88, Mr Slotty, BetConstruct, The Ear, SoftGamings, as well as other casino aggregators and online operators. As a result, today Triple Cherry’s games are already available to players in over twenty regulated markets.

All Types Of Grids

Intended to perform superbly across all desktop and mobile devices (and smart TVs), slots made by Triple Cherry perfectly adapt to any screen in landscape and portrait mode. They support more than 100 different currencies and an impressive bunch of languages. The library mainly consists of medium to high volatility titles that offer a decent hit rate of about 39%. When it comes to return to player, it is usually set at about 96%.

While the majority of their 3D games are equipped with a 5x3 greed, there are some interesting exceptions. Fans of classic fruit machines can check Joker’s Kingdom that has 3 reels and just 1 row, offering a high-variance extravaganza of juicy cherries and lucky sevens. Another extreme comes in the form of a 3x4x4x4x3 playfield belong to Tomoe’s Sushi Bar – enjoy the world’s best and freshest sushi spiced up with extra prizes and free spins.

What Is So Amazing About Triple Cherry 3D Slots?

Still, what makes them really stand out from the crowd is their off-the-charts aesthetics complemented by incredibly engaging extra features, with mini-games being the true house specialty offered by this studio. Inspired by the most fascinating bull run, vibrant Saint Fermine welcomes you to Pamplona and offers a multitude of chances to reach the bullring and win the final fight.

Complemented by an RTP of 96.07%, this slot has five reels, four rows, and 40 pay lines where punters can land their lucky combinations. Three bonus symbols trigger an immersive mini-game where you can choose to play the role of a bull or a runner to figure out the right street and discover secret chests with great awards. In addition to that, this title also contains two types of free spins enriched with locking wilds.