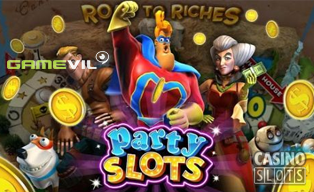 There is a lot of enthusiasm for the social game market right now, so we're delivering on content that players are asking for. It’s a strategic area of growth, and Party Slots offers a level of engagement that can’t be beat.

GAMEVIL are a premier mobile gaming company that are located in Los Angles (LA).  Their company established in 2000 and went on to create an array of award winning mobile games based on a variety of different topics.

In January 2014, GAMEVIL decided to dip their toe into the mobile video slot game industry and launched their outstanding Jackpot Madness App.  This app offered players a range of differently themed video slot games; however, the unique aspect was that it allowed you to compete with millions of other users for a progressive jackpot.

Thanks to the success of their Jackpot Madness slot game, GAMEVIL are now releasing a follow up app in the form of Party Slots.  Party Slots has recently been released onto Google Play (formally Android Market) and is once again themed around a bunch of different video slot games.  It has been focused on the social aspect of gaming and; therefore, players can cooperate and compete for bonuses and community jackpots.  It also has a range of exciting bonus games and has a built in rewards system where you can earn points as you play.