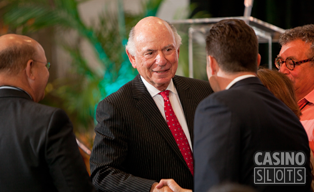 Last week we talked about how the Chief Executive of the Las Vegas Sands; Sheldon Adelson has supported the Coalition to Stop Internet Gambling’s (CSIG), by paying for a range of online advertisements to be created.

This week it is not Sheldon Adelson that is in the spotlight, but rather his right hand man, and Chief Operating Officer of the Las Vegas Sands; Michael Leven.   Mr Leven hosted an early morning meeting in front of the Nevada Republican Party where he claimed that the legalisation of online gambling in America is only being supported by the government, as it is another source of taxable income.  He believes that the federal government needs this extra income to cover their uncontrollable spending.

He went on to give examples from his and Mr Andelson personal experiences.  This included a $40,000 interest payment on top of a tax rebate that the IBS were late in paying, and the fact that a multi-billionaire such as Adelson is still paid a social security cheque that he clearly doesn’t need.