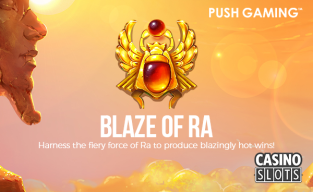 Push Gaming has announced that their next slot release will be the ancient Egyptian themed Blaze of Ra. Scheduled to land at online and mobile optimised casinos on 22nd May, the game has 5 reels and 40 paylines packed full with 4 rows of classic symbols such as the Eye of Horus, Anubis, the dog-headed God and the mysterious Ahnk.

It's set against a stunning backdrop of giant statues and pyramids in the desert, and the shifting sands reveal new backgrounds while the bonus features are in play.

The eagle-headed Sun God, Ra is a wild symbol and when it appears on any 2 or more reels in the top 2 rows, the Nudging Wilds feature begins, with these symbols moving down the rows for greater chances of landing win-lines.

A jeweled Scarab Beetle is the scatter symbol, taking players to a special free spins round when it stops in 3 or more places at once. Each triggering scatter symbol will reveal a number and the sum of these shows how many free games will then play out.

During these bonus spins, reels 1, 3, and 5 will be filled with the Ra wild symbol, which guarantees that each spin will be a winner. It's even possible to trigger further bonus games when more Scarab Beetles appear.

Great graphics, rewarding bonuses and the huge popularity of the ancient Egytian theme should ensure success for the Balze of Ra slot game when it's launched on 22nd May.