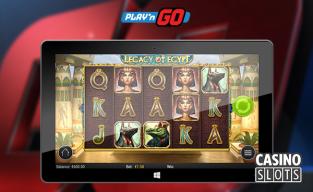 Slot machines with an ancient Egyptian theme are hugely popular, but when a game with unique features is released, it's destined for great success. Just such a slot is Lecacy of Egypt, which has just been announced by Play n'GO and is due for release later in April. It's filled with classic symbols like pyramids and scarab beetles, but comes with a very special bonus round where wins are multiplied and extra wild symbols are in play.

Back To Ancient Egypt

The beautifully designed symbols of this 5-reel, 30-payline game are filled with the Gods of Egypt, a Pharaoh and his Queen, along with the scarab beetle, which is wild and able to act as others, completing win-lines when it's in the right places, while also returning some of the top prizes when making up a line on its own. Traditional playing card icons create the lower value lines, and each symbol becomes animated when it's part of a winning combination, bringing these characters from the past back to life.

It all plays out against an impressive backdrop of temples and decorative columns, for that authentic Egyptian atmosphere which is so popular with players.

When 3 pyramid scatter symbols appear, players are shown a special Wheel of the Gods, which spins up a number of bonus games, while each spin will have a random multiplier attached to winnings throughout them. Up to 20 free spins can be claimed, and during these the pyramids become extra wild symbols. Any 2 pyramid wilds will trigger up to 8 additional spins and while these are playing out, any 3 pyramids will double the multipliers, for some potentially huge rewards.

Where To Discover The Legacy Of Egypt

This slot is due to be released on 25th of April, at the many online and mobile optimised casinos that carry Play n'GO games. There's a wide bet range and the chance to land some huge coin wins in this attractive game, where ancient royals and deities take players to state of the art features.