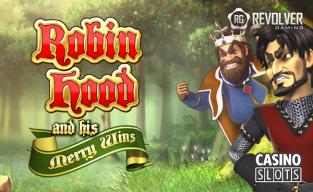 The latest slot from Revolver Gaming is Robin Hood and his Merry Wins, which has the famous outlaw of Sherwood Forest and his companions granting a series of bonus features designed to make players merry as well. It's a 5-reel game, with 20 fixed paylines and comes with some impressive 3D graphics and animations.

The game plays out against a forested background and along with Maid Marian and the Sheriff of Nottingham, we have the playing card symbols 9 through to A and Robin himself, who appears as a wild symbol. When the hooded image of Robin lands, he will first take the hood off and if he's on reels 2 or 4, he will then expand across the reel to help complete winning lines.

The castle is a scatter symbol and when 3, 4, or 5 appear in any places at once, 5, 10, or 20 free spins, where Robin is a stacked wild on all reels, are awarded, while there's payouts of up to 150x the stake when the Marian's Prize symbol lands in any 3 or more positions. In this fun feature, players will collect wins by finding Merry Men behind their 'Wanted' posters, but they will need to choose carefully, as finding the Sheriff will end the round. It's a multi-level feature that can see Robin and Marian reunited for the highest prizes.

A randomly-awarded On Your Mark feature takes players to a target shooting game, where Robin fires his arrows straight and true to land wins of up to 12x the triggering stake.

Where To Find The Outlaws

Optimised for mobiles and desktop computers alike, Robin Hood and his Merry Wins is on target to land at casinos which use the Revolver Gaming range. it's got a high return to player percentage, which may make players think they are robbing from the casino, but whether they choose to gives their wins to the poor or keep them for themselves is a matter of choice.