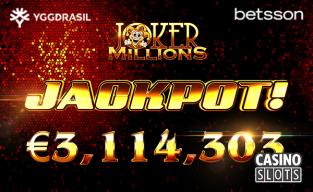 Just 5 months after paying out a record E7.8 million prize, the Joker Millions slot from Yggdrasil has done it again. A lucky player at Betsson scooped E3,114,303 on the game, for a stake of just E1.25 per spin.

The win came over the Easter holiday, so the fortunate player had an extra reason to celebrate the season. They have chosen to stay anonymous, be we know that they were playing on a laptop for a E1.25 stake.

It's the latest life-changing win from this progressive jackpot network. Joker Millions and Empire Fortune piad out a combined E10 million in a two-week period.

Joker Jackpot was launched in 2015 and has become one of the top games in the Yggdrasil portfolio. The exciting gameplay and thrilling bonus features have ensured that even players who don't scoop a multi-million prize will want to come back and play the game.

“To have yet another huge jackpot fall is amazing, and I’m pleased that we’re able to reward loyal Yggdrasil slot fans with gigantic prizes.''