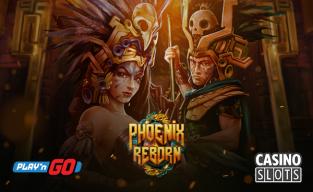 Play 'n GO have just announced the launch of their latest slot machine for online and mobile casinos. Phoenix Reborn is based around ancient Aztec civilization, where symbols of warriors help players to land some of the biggest payouts.

Phoenix Reborn is a 5-reel game, where each reel contains 6 symbols. 40 paylines cross the screen, paying prizes when 3 or more symbols of the same kind are seen from the left side.

The Phoenix is Rising

The richly designed symbols are set against an Aztec temple, giving Phoenix Reborn a dramatic appearance that looks just as good across desktop PC and mobile devices. The Phoenix symbol has special powers, as it's a wild icon, able to act as others if needed to complete combinations. The Phoenix also expands up and down any reel it lands on to help players to claim wins.

Other symbols include Aztec items, snakes, toucans, and jaguars. The male and female Aztecs are stacked symbols, filling reels and paying out prizes of up to 10 times the stake when seen right across paylines.

The Aztec mask symbol awards 7, 12, or 20 free spins when it lands in any 3, 4, or 5 places respectively. During these bonus games, players will see at least 1 expanding wild Phoenix symbol in each spin. With luck, all 5 reels will be filled with the wild symbol, leading to a jackpot of 1,000x the triggering bet.

The bet range starts at just 0.20, putting Phoenix Reborn within reach of all players, while the maximum stake is set at 100.00. The game has a generous default return to player percentage of 96.50%.

Players will find Phoenix Reborn at casinos which feature games and software from the popular Play 'n GO, developer.