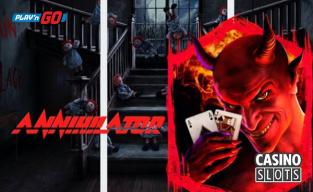 Annihilator has been at the forefront of thrash metal for over 30 years, and they now have their own slot machine themed around the band and their music.  The Annihilator online and mobile slot comes from Play'n GO, and is packed with in-game features and special bonus rounds.

Turn Up The Volume

Several of the bands signature hits are also featured, so players can choose their favourite tune to accompany each spin of the reels. Annihilator sees symbols of guitarist Jeff Waters, album covers and playing card icons over 5 reels and 10 paylines. Waters appears as a wild symbol, who can substitute for others if needed.

Annihilator has 2 random, in-game features. These include the In Command bonus, where the wild expands across reels, followed by respins that carry on until a win or feature trigger. In the Fun Palace bonus, players pick from Clare dolls to unlock instant wins, or to launch the free games.

Scatter symbols are another path to the Set the World on Fire free spins feature. Eight games play out, during which Jeff Waters expands across reels and leaves a trail of fire behind him as he moves across the reels. If more wilds land in the flames, they turn the while trail wild.