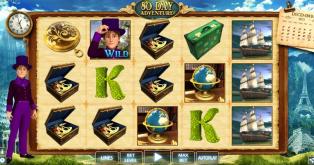 The online games developer World Match has launched a new 3D slot game called 80 Day Adventure.  It is a 5 reels and 25 pay lines game that has been heavily influenced by the 1873 novel; Around the World in Eighty Days.

The game features; a Wild symbol that can double your winnings during the base game and free play, a free spins round where you can trigger up to 30 free spins, a multi-levelled bonus round that takes players on an exciting trip around the world and a progressive jackpot.

The 3D graphics in the game are impressive and include a range of different symbols that you would associate with a 19th century adventure including; a Ship, a Compass, a Suitcase, a Pocket Watch and much more.