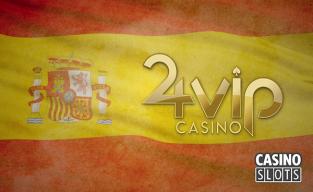 The Superior Share Casino Group has announced that one of their flagship sites, 24VIP Casino, is to be made available in a Spanish version. Their Superior Casino site already caters for Spanish markets, and 24VIP Casino has now followed its lead.

This reflects the fact that playing at online casinos is becoming increasingly popular, especially in Latin America. Launched in 2017, 24VIP Casino has already proved to be a big success in other languages and extending this to the vast Spanish-speaking markets will further the appeal of this casino into new areas.

All of the site, including the games, promotions, banking services and VIP club can be found in Spanish, while punters from around the world can deposit funds in USD, Euros, ZAR, GBP, AUD and bitcoins. The Spanish version of 24VIP Casino is now live and ready to play.

With a full suite of table games, cards, video poker and slots, 24VIP Casino has something for everyone. Rival Gaming, Betsoft, and ViVo Gaming provide the software, giving customers a wide choice of reliable games. Bonus funds and free games can be collected by new customers, while returning players will find that the site lives up to the name by giving them the VIP treatment at all times.