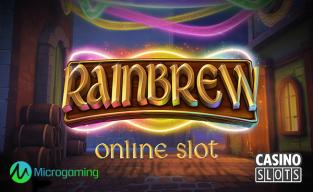 Rainbrew is a new slot from Microgaming that follows the popular Irish theme and comes with a unique Sidewinder feature that gives players up to 1,125 ways to win during the games. It's been developed for Microgaming by Just For The Win and will be available from 16th Augsut, 2018.

The game is set in a leprechauns' brewery, where Celtic symbols, pipes, mugs and beer barrels jostle for position across the reels. The leprechaun and his female companion will pay out the top prizes when landing across the game. The unusual layout sees the five main reels each having 3 symbols on them, while horizontal reels above and below, each have 5 symbols on them. In the base games, there's a 243 Ways to Win format. Special wild symbols include a standard wild, plus 2 more that are linked to the Sidewinder feature on the horizontal reels.

Wilds activate the top and bottom reels, adding more ways to win, plus there's extra wilds on the main reel set to help players collect more rewards. With the top Sidewinder reel in play, there's 576 ways to win, while having both horizontal reels in action gives players a huge 1,125 ways to line up symbols.

The Rainbrew game logo will trigger a free spins bonus round that sees symbols flying through the pipework that powers this brewery. During the bonus games, the Sidewinder feature is always active and expanding wilds can add another exciting dimension to the gameplay.

This online and mobile optimised game is due for release at Microgaming casinos, where the popular theme and innovative gameplay are sure to make it a big success.

Rainbrew’s unique Sidewinder feature gives players new ways to win big. The base game unlocks additional ways to win with the wild symbols and the expanding wilds in free spins takes the game to a whole new exciting level

Tiger Holmgren, Chief Product Officer at Just For The Win

Just For The Win