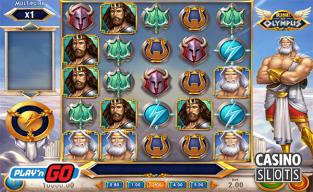 Play'n GO has announced that their Rise of Olympus slot is set for release on 23rd August, 2018. It's themed around Greek Gods and myths, and players can be helped out by Hades, Zeus and Poseidon as the reels spin.

The symbols are arranged in a 5x5 grid, with winning combinations created by matching 3 or more symbols horizontally or vertically. Greek columns frame the reels, and players will see a God standing to one side, with a special win meter to the other side. The stylised symbols include lightning bolts, tridents and helmets, while the Gods themselves will create the higher-paying combinations when they appear.

This slot uses a cascading symbols format, where symbols that make up a win will disappear, allowing new ones to drop down into the empty spaces. If this creates another win, a multiplier is applied, and this rises until no new winnngs are on the reels.

The Hand of God feature can be triggered at random after a non-winning spin. Hades transforms one type of symbol into another, while Zeus will remove two types of symbol from the reels. Posiedon adds extra wild symbols to the mix, with each feature giving players some extra chances to collect winnings.

The Wrath Of The Gods

The win meter fills up when Gods pay out prizes. Once it's full, all three Hand of God features will be triggered at the same time. If the whole grid of symbols is cleared, players can trigger their choice of free spins features, where the Hand of God is active on all non-winning spins. Win multipliers of up to 20x can be awarded during these bonus games.

Rise of Olympus is mobile optimised and comes from the award-winning Play'n GO developer.