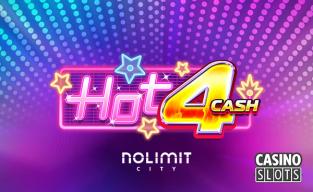 Hot4Cash is a colourful slot from Nolimit City that's just been launched across the many online and mobile casino sites that feature games and software from this innovative supplier.

It marks the first time that Nolimit City has launched 2 slots in a single month, with Thor: Hammer Time released to great acclaim earlier on in August.

Try Out Some Hot Gameplay

At first glance, Hot4Cash looks like a traditional fruit machine, but it won't take player long to realise that just 3 groups of symbols appear across the 5 reels and 10 paylines. The base games are fast-paced and exciting, with any 3 or more matching symbols across the 2-3-3-3-2 reel layout leading to a prize.

Cherries, diamonds and 7's appear in red, green and blue colours. If players land 4 identical symbols, in any colour on a line, they trigger a Colossal Spins bonus feature. The center reels fill with a giant 3x3 symbol, while the outer reels spin again. Colossal Spins pay both ways, making it easier to collect a prize.

All blue, red, or green symbols across a line launch the Lucky Wheels bonus. A wheel spins uo cahs awards, or takes players to an even more valuable wheel where huge payouts await.

The Hot4Cash slot can be played for stakes of just 0.10 per spin on desktop PCs and mobile devices. This medium to high volatility game has an average RTP of 96.05% and promises thrilling gameplay in both the base games and during the 3 bonus rounds.

“Hot4Cash is a game built solely around the features and its innovative trigger feature, highlighted within the 4 Hot Zones which are constantly present. With an exciting individual reel stop and high paced vibe, this machine will make your heart beat '