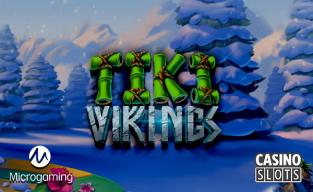 Tiki Vikings is a new slot from Microgaming and Just For The Win (JFTW), which sees Norse raiders bringing a little bit of the Pacific Islands back to their homeland.

This fun, cartoonish slot features 5 reels, 20 paylines and bonus features such as reel respins and upgraded symbols. The frozen landscape of their Scandinavian homeland is richly decorated with coconuts and colourful flowers.

Alongside the wood-effect and flower-decorated playing card symbols, players will find 3 Viking characters that pay the top prizes when landing across paylines from left to right. The Tiki Viking slot also comes with a wild symbol that helps to complete win-lines.

Any Vikings that create a winning combination will trigger a special Symbol Lock Re-Spin feature. The Viking stays locked in place while the reels spin again and the feature carries on if more examples of the winning Viking appear in the re-spin.

It can lead to a whole mob of marauders on the reels and some big prize payouts, while 3 consecutive re-spins triggers the Symbol Upgrade feature. Locked symbols transform into higher-value ones, for the potential for epic wins.

Tiki Vikings is now available on desktop and mobile formats at casinos which use the hugely popular Microgaming range. It has been developed on behalf of Microgaming by JFTW, an independent studio that has already had great success with slots such as Rockabilly Wolves and Deco Diamonds.

“Just For The Win have delivered yet another entertaining and highly original slot game. Tiki Vikings merges two popular themes to great effect, providing players with a colourful and fun base game, boosted with excellent bonus mechanics.''