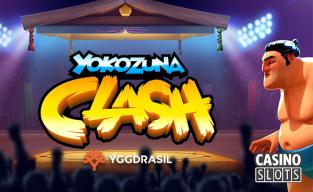 Yggdrasil has announced the launch of Yokozuna Clash. It's an exciting slot set within the world of Sumo wrestling and sees two combatants facing off against each other in front of the 5 reels.

The cartoon style graphics include symbols of mythical dragons, griffins, and tigers. Card icons pay out smaller prizes, while a wild symbol helps to complete winning sequences. Players aim to reach the highest rank of Yokozuna in this epic battle.

It's a 243 ways to win game, where the 2 Sumo wrestlers will award random features at any time. The blue character adds up to 3 wild symbols to the reels, while the red Sumo multiplies wins by 2x or 3x.

A free spins symbol triggers a special Tournament Free Spins round where combinations can start from both the left and right sides of the reels. A Sumo is chosen to fight on behalf of the players during the round.

Wins from the left fill a power meter, moving a bar 1 space, while wins starting from the right fill the meter 2 places at a time,, with the wrestlers pushing each other back and forth at the same time. If the power meter fills from the right before the round ends, players move to the next round of the tournament where they fight Yokozuna.

Beat him and all wins from the free spins are doubled. At this level, other wrestlers award further features, such as extra wilds, more moves on the power meter and higher multipliers.

5 of a kind wins lead to a Sumo Clash feature, which sees more examples of the winning symbol added, hopefully boosting wins even further.

Yokozuna Clash is now at online and mobile optimised casinos that use the Yggdrasil range. It's a medium to high volatility slot, with an RTP of 96.3%

“The game has a lot of incredible features in store and easily triggered Free Spin rounds. In Free Spin mode, the wrestlers reflect the happenings on the reels,adding more wilds or multipliers.''