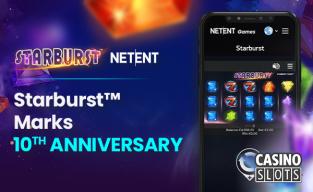 Starburst is one of the biggest online slots, and 2022 marks 10 years since this desktop and mobile game hit casinos that carry the NetEnt range.

A special event marked the occasion, with fireworks, astronaut performers, live music, and a 3D mapped cake enjoyed by game developers and operators.

Colourful graphics, respins, and wild symbols have made Starburst a decade-long success story. In 2021, NetEnt launched a sequel, Starburst XXXtreme, which gives players the option to purchase guaranteed wilds. It features increased volatility, and a vast win potential.

Players and casino operators can certainly look forward to another 10 years of thrills from Starburst and Starburst XXXtreme.

Launched in 1996, NetEnt has become one of the biggest names in the online casino games industry. Their range is now seen in over 200 sites around the world, where players find hits such as Fruit Shop, Dazzle Me, and the Mega Fortune online slot, with it’s huge progressive jackpot.

The event was an incredible way of celebrating Starburst’s™ 10-year anniversary. A 10 year run for a single slot game is an incredible achievement, and it’s been a favourite with players ever since it was first launched. Starburst™ is the full package.