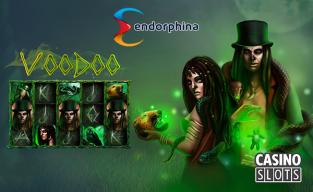 One of the issues that you see sometimes in the online slots industry is that it can be tricky for developers to come up with good themes and concepts that haven't been used before. Endorphina has done a pretty good job with mixing things up with their previous releases, and they've recently announced a new video slot that brings yet another fresh theme. The Voodoo game is sure to give players something to be spooked about.

Details on This New Game

Voodoo has a voodoo/witch doctor sort of theme that's pretty dark with great graphics. It's a 10-payline video slot with five reels and three rows. In terms of features, you'll find wild symbols, a free spins bonus feature and more in this game. If you were a fan of movies like the Blair Witch Project several years ago, or if you just like things with a spooky motif in general, then this is a slot that you should definitely check out.

Endorphina definitely does things to make themselves stand out, and we have to think about the timing of this release in this context. Releasing a dark, scary slot a few weeks before Christmas and other winter holidays seems like a strange choice, and we would have thought this game would be released around Halloween instead. However, that would have probably made it get lost in the shuffle with all of the other games with dark themes that are released by other developers around the same time. With this choice of timing, they stand out a bit and get more attention.

While the big story for this company in 2016 was the anticipation and build behind their Twerk release, they have had other releases this year as well, and Voodoo seems to be the last in the list. They're ending on a good note, and this gives them momentum going into 2017. This attention-grabbing company is sure to be up to something in the new year, and we're excited to see what they come up with. In the meantime, be sure to check out the awesome graphics and effects of Voodoo because you could ring in the new year with a scary good win.

Press Release, Voodoo Slot Will Get You Hypnotized endorphinamarketing.com, December 9, 2016