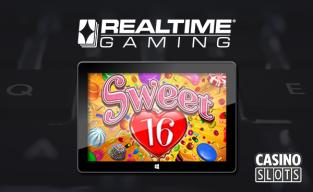 Realtime Gaming has announced an upcoming release. They've called it Sweet 16, and it's a video slot based around lots of different kinds of candy. It seems visually similar to Candy Crush Saga, the extremely popular social game, and it uses a format and set of features that drives some very high-paced action that players will love.

Details on This Game

The new Sweet 16 uses a layout that is sure to give players lots of action with a high hit-rate since it uses the all-ways approach. This makes every regular paying symbol into what amounts to a left-to-right scatter symbol, so you just have to get symbols on the reels to have them pay, which is a lot different than needing them to line up on particular paylines. Additionally, there are grouped wilds in this game, which will increase the payouts even more, particularly as a part of the all-ways format where they can be used to effectively multiply wins several times over.

Whenever you get matching symbols on the reels in certain ways, they will morph to give you even more winnings. This morphing can happen several times on the same spin for more chances for payouts, and they can lead to multipliers as well. The multipliers can go as high as 10x, which is pretty impressive. When you combine this with the rest of the features in this game and the high hit-rate, it's something that is sure to be a big hit with the players.

Realtime Gaming has done a pretty great job over the past few years, but 2016 has been solid for them in particular. A few years ago, they answered critics who said that their games looked like they were stuck in a time machine from 15 years ago. The result was a number of very visually impressive titles with solid gameplay, which is exactly what the industry needs right now. RTG definitely has both quality graphics and gameplay going for them right now, and it's looking like Sweet 16's December 14 release will show that once again.