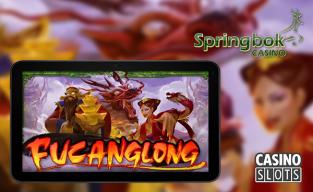 The first 2017 release for Realtime Gaming has already been announced. It's coming on January 11, 2017, and it will first debut at Springbok Casino. The name of the game is Fucanglong, and it's about a Chinese dragon who guards the wealth stored in the underworld. It's an interesting theme for an Asian concept-based slot, and it's going to be packed with rendered 3D graphics.

The features in this game are pretty solid and will make for some great gameplay. You can get scattered dragon mountain symbols to get a set of free spins, and this includes re-triggers that are easy to get and multipliers as high as 8x. The scattered dragon pearl symbols will get you an instant minimum win along with eight free spins. You can also find yourself getting multiple winning combinations at the same time thanks to the expanding wild dragon symbol. It's clear that there are lots of ways to win in this upcoming slot.

Realtime Gaming has had a few games in the past that have used 3D graphics, but they've been using them more and more when they make sense and when they have games that will really benefit from them. With all of the dragons and scenery in this slot, it makes sense that they would go with the 3D route, and that makes it really exciting. We're interested to see more of what they plan to do with the visuals since it was frequently a criticism of RTG in the past that their graphics were lacking.

Springbok Casino is one of the top online casinos that focuses on South Africa. They use the Realtime Gaming software, and they have a strong reputation for paying out when they are supposed to. Everything about this operation is professional, and it's hard to really find anything about them to complain about. They frequently get exclusive releases before anyone else thanks to a deal with Realtime Gaming, and that makes them a particularly hot casino to play with. It'll be interesting to see how long this deal lasts in the future, but for now, it's working out well for both companies.