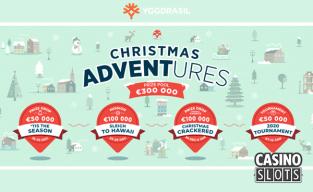 Yggdrasil has announced its new Christmas ADVENTures promotion, which will give early presents to its players, with €300,000 up for grabs.

Start The ADVENTures With Yggdrasil

From 16th December 2019 to 12th January 2020, a number of special events are occurring under the Christmas ADVENTures offer. Players can win a share of prizes when they spin the reels of selected Yggdrasil slot machines across online and mobile casinos that carry the range from this innovative developer.

Get In The Festive Mood

It kicks off with the 'Tis the Season feature. Over 680 individual prizes from a pool of €50,000 are available to anyone who plays games such as Vikings Go Wild, Tut's Twister, and the seasonal Winterberries games.

The Sleigh To Hawaii promotion has a prize pool of €100,000. That includes a fantastic trip to Hawaii for 2, which can be won when players enjoy slots such as Vikings Go Berzerk, Vikings Go To Hell and Valley of the Gods. This amazing offer carries on over the big day itself until the Christmas Crakered round starts on December 30th.

Another €100,000 has to be won across a number of popular Yggdrasil slots. There is also a prize drop double chance feature that can bring in even bigger wins.

Players can ring in the New Year, and then from January 6th, play the €50,000 2020 Tournament. This grand finale to the Christmas ADVENTures promotion runs until the 12th of January. Qualifying slots include Golden Fish Tank, Casino Cosmos, Jackpot Raiders, and Dwarf Mine. Competitors will need to play all these games to rise p the leaderboard towards the big prizes waiting for the winners.

We are delighted to announce our festive fun-filled campaign, Christmas ADVENTures. “Across the entire period, we will be giving away a staggering €300,000 across plenty of Yggdrasil titles, and will bring presents to all those who deserve a surprise.''