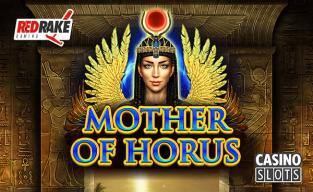 Mother of Horus is a new slot from Red Rake Gaming that sets the action among the temples and catacombs of ancient Egypt. It's a 5-reel, 50-line game where a special prize bar above the reels can lead to bonuses in any spin.

In Egyptian religion, the Mother of Horus is the goddess Isis. She features as a high-paying symbol, along with a powerful priest and a scarab beetle. Other symbols include pyramids, temples and the high-card icons 9 through to A. Players win landing 3 or more matching symbols across a line.

The reels sit against a backdrop of torchlit hieroglyphics. Below the game, players will see the control options, where they can set their stakes from just 0.50 per spin to a high limit of 35.00. Above, is the prize bar, which is key to the many features. The features on the prize bar change with each spin.

When the Mother of Horus herself appears on reels 1, 3, or 5, she can unlock instant coin wins, free games, or even trigger the jackpot bonus round from the prize bar above the respective reels. She's also a wild symbol who can act as other, completing extra lines of matching symbols. The scarab is a second wild that can nudge up and down reels to help it complete combinations.

In the free games, Isis can appear on all reels. and players could scoop a prize worth 2,500x their total bet during this feature. In the base games and free spins, it's possible for multiple images of Isis to award several bonuses at once.

If Isis awards the jackpot round, a Destiny Roulette feature offers players spin on a jackpot wheel. Minor, Major, or Grand jackpots can be won, and it's possible to be awarded more than one wheel, with all prizes accumulated and paid out together.

Mother of Isis is a medium volatility game that comes with a generous RTP of 95.3%. It's available at Red Rake Gaming online and mobile casino sites from 19th December 2019.