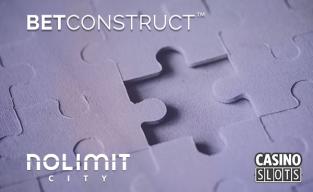 BetConstruct has announced that their already impressive casino games platform is about to get even bigger. The Nolimit City range of online and mobile optimised slots will now be made available to sites that use the Betconstruct platform.

Based in Armenia, BetConstruct operates its award winning games and content service around the world. It's grown year on year to become one of the premier platform providers to multiple casinos.

Nolimit City is based in Malta. The company has had a busy year, with the launch of games such as Dragon Tribe, Tombstone, and Manhatten Goes Wild. More cutting-edge slots are scheduled for launch through 2020. Some exciting and innovative client retention tolls are due to be announced early in the new year.

The Nolimit City rage is now available and players at BetConstruct-powered casinos can start enjoying these games right away.

“Celebrating the news of our partnership with a titan of the caliber of BetConstruct is of critical importance to our recipe for success. We have so much more in store for 2020 and having strong partners is one of the main drivers”