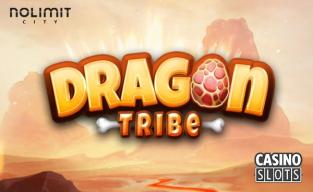 The latest slot from NoLimit City takes players on a journey way back in time, where a cavewoman and dragons stalk the reels. Dragon Tribe is a 6-reel game, crossed by a huge 4,096 ways to win. It features the xNudge and xWays systems from NoLimit City, which can lead to plenty of high-paying spins.

The graphics are in a cartoon style. Alongside the bone-shaped playing card symbols, players will encounter 5 different dragons and the red-haired cavewoman, She pays back 3.75x the total bet when she lands across all 6 reels.

Dragon Tribe uses cascading reels. Any symbols that make up a winning combination will disappear, leaving spaces for new ones to drop into. If this makes up new wins, another cascade occurs, and so on until no new wins are seen.

The dragon egg is a wild symbol. Whenever it appears, on any row, apart from the bottom one, it triggers the xNudge feature, which has it moving down 1 row at a time for the following spins. Each step down activates higher multipliers if the wild complete a combination.

To trigger the xWays feature, players will need to land the X symbol on all reels. The number of rows expands, and at the maximum, the Dragon Tribe slot has a huge 20,763 different ways to win running across the game.

Any 3 scatter symbol launch a free spins round, and while the base number is 10 spins, more scatters lead to more free games. Players get to pick from 2 different free spins modes. The Dragon Spins feature has extra xNudge wilds in play, while the Extreme mode has xNudges and xWays, which can lead to higher payouts, but they tend to appear less often.

Either way, the Dragon Tribe slot has high returns and the chance to collect huge payouts. It's a high volatility game which can be played on desktop and mobile platforms for stakes of between 0.20 and 100.00 per spin.

''Producing a cascading slot with xNudge and xWays has been an exciting challange to tackle and gave us the opportunity to create an explosive slot with true win potential.''