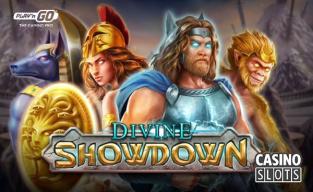 Players can join an epic battle with the Divine Showdown online slot from Play'n GO. It brings together a number of legendary gods across 5 reels and 20 paylines. This online and mobile optimised slot features win multipliers, wild reels, transforming symbols, synchronised reels and free games.

Steep mountains and huge temples rise up behind the reels of the Divine Showdown slot. Gods of Egypt, Greece, and Norse legends are all featured, along with high card symbols. Thor is the most valuable symbol, returning wins of up to 16x the stake when he lands across all 5 reels on a payline. A wild sword symbol acts as other if it can complete winning lines, and it can pay 20x the stake.

In the randomly-awarded Multiplier Reel feature, any win can be boosted by up to 10x its base value.

The Power Spin feature is another randomly-triggered event. It's a respin of the reels, during which a god applies their own powers. Thor transforms all high value symbol into himself, while Athena matches 3 reels with identical symbols. Anubis turns symbols into extar wilds, and  Wukong turns whole reels wild.

Three scattter symbols start a free spins round. Before they begin, players pick a god to represent them in battle. A Battle Reel decides if the gods go to war, or a free spin plays out. Players have 3 lives and spins carry on until all are lost.

Divine Showdown uses stunning graphics to bring ancient gods to desktop PCs and mobile devices. It's a high volatility game where players can collect wins of up to 5,000x the stakes. With a bet range of 0.20 to 100.00 per spin, it will appeal to casual players and high rollers like.

“Mythologies are extremely popular in all forms of entertainment but they very rarely ever crossover with each other in any way. We wanted an imaginative concept for this game and, with the scope each mythology brings to the title.''