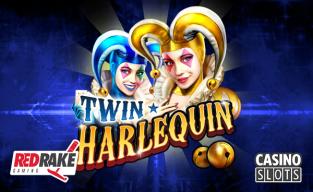 Twin Harlequin is a colourful new slot from Red Rake Gaming which features BAR symbols, along with blue and yellow Harlequin characters. These girls hand out big wins, while also taking players to a free games bonus round. Players can spin Roulette wheels to collect bonuses.

Golden bells and valuable red 7's also appear across the 5 reels of the Twin Harlequin slot. Any symbols that are in a winning combination will vanish, with new ones dropping down to fill the gaps.

If players get a series of 5 respins from this tumbling reels feature, the gain access to the Harlequin Roulette feature. A progress bar helps players to keep track of their respins. Two bonus wheels will appear, each overseen by its own Harlequin. A central reel spins first, deciding which of the Harlequin Roulette wheels get activated.

The blue wheel spins up min multipliers, while the blue wheel reveals a number of free spins. It's also possible to trigger both wheels at the same time, which leads to big wins. Up to 100 free games can be triggered, and during these, players could trigger the Harlequin Roulette wheels if they have a sequence of 5 respins again.

The game is fully optimised for mobile and desktop casinos. Gamblers can use stakes of between 0.25 to 75.00 per spin. The colourful symbols and high-end artwork are signature features of the Red Rake Gaming range.

Red Rake Gaming slots can be played in 22 languages, with multiple currencies. It's available across regulated markets in amny different countries.