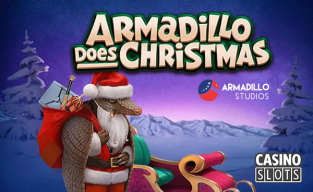 A cartoon Rudolph, polar bear, and elf join Armadillo on the reels, along with red stockings, golden bells, and other emblems of Christmas. An icy wild symbol can act as others to complete combinations, and a special sleigh bonus symbol unlocks one of the many features of this action-packed game.

Random features can trigger before the reels stop spinning. These include up to 4 wilds, stacked wild reels, fused reels with giant 2x2, 3x3, or 4x4 symbols, or random multipliers of up to 5x. After a spin, further extra features can trigger, such as symbol upgrades that improve all examples of one type into a higher paying symbol, and instant prizes of 1x to 200x.

The animated Armadillo delivers further Christmas treats. He drinks shots of whisky to put him in a generous mood and pay out a selection of gifts. Sleigh symbols trigger a bonus trail, where he collects coins for win multipliers, credit upgrades, and a special Victory Prizepot if he makes it to the end of the trail.

A Christmas Collection feature sees the Armadillo collect candy canes, gifts, and skis, that go under a Christmas tree and hearts award extra lives that let him progress further along the trail.

This all-action festive adventure hits desktop and mobile casinos on 8th December, where it joins other hits from Armadillo Studios, such as Queen of Egypt Exotic Wilds, and 15 Armadillos.