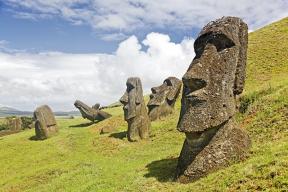 The Hatton Garden burglary only happened less than a year ago in April 2015, but Easter Island Studios (EIS for short) has already released a new online slot based on this robbery. This title uses 30 paylines on a regular 5x3 video slot format, and it's the first new EIS release of 2016. This is really interesting to see them jumping on recent events like this, but that's a source for slot themes that probably hasn't been explored as much as it could have been in the past, so it's cool to see EIS going after it.

First thing's first: They are acknowledging that they've taken some liberties with what actually happened in the Hatton Garden Heist. They've played a little bit with what happened to turn it into a very entertaining slot, and chances are that players aren't going to mind at all. It's not like anyone is looking at an online video slot as an accurate historical representation of pretty much anything ever.

Easter Island Studios has been working on building up a portfolio for themselves, and this list of titles includes games like Wheel of Destiny, an Asian-themed game with a format based on the idea that all five reels are a part of the same 360-degree wheel, and there are 35 ways to win in all kinds of directions.

This selection also includes Sprezzatura, a game based around the fictional Chef Leonardo in his culinary war against the competition. You'll see animated vegetables trying to avoid falling in the pot in this game that takes a lighter approach to the super-serious competitive cooking circuit.

Professor Archibald and the Catacombs of Easter Island is yet another title in their series of releases. It feels like an Indiana Jones adventure with 20 paylines spread across five reels of 3D action. It's cinematic approach to graphics is a bit different than what you find in games built up on unique themes, and it's something that's normally saved for games based on movies and television shows.

The Future of EIS

The game quality that EIS is coming out with is pretty strong, and it'll be interesting to see if they're able to keep it up. In any event, they've got a great start to 2016, and we're very interested to see what else they have in store.