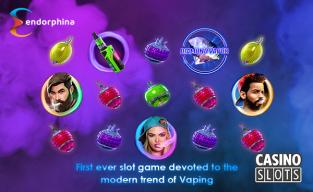 Vaping is a smoking substitute that uses a device called an electronic cigarette. While many people have debating the pros and cons of this, there's no denying that there is a lot of buzz around it right now, and a lot of people are familiar with the products. Endorphina is taking advantage of that wth their newest slot release, which is based on a vaping theme. To our knowledge, this is the first slot to use this theme in the industry.

A Fruit Machine With a Twist

One of the key elements of the concept used here is that vaping can use different flavors of liquid that are used in the product, and fruit flavors are very popular. Along these lines, Endorphina has tied to the concepts together by making the game a fruit machine in a lot of ways, though it has five reels and plays like a video slot. With different flavors on the reels matching up to give you prizes, it brings the vaping and slot worlds together in a major way.

The name of the game is Diamond Vapor, which is the same name as their partner for the release, an actual company called Diamond Vapor. This slot is a nice piece of cross-promotion, and it's expected to be tied in with ICE Totally Gaming as well. Players can get in on the action online to run up winnings for prizes that can be collected at this event at Endorphina's stand, which ties the game into another real-life element as well.

There's no doubt that this company is looking to hit the ground running in 2017, and they've already done it in a major way. This game release shows that they are building off of the momentum they had with Twerk and other slot releases from last year, and they definitely aren't resting on their laurels. It's an exciting thing that they're doing with using so many atypical themes for their slots, and this is the type of thing that helps to advance the industry as a whole.