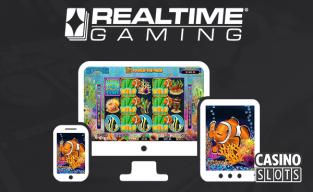 Back around three or four years ago, Realtime Gaming was at the tail-end of a tremendous amount of criticism surrounding their game release schedule. They shifted gears, however, and started focusing a lot more on the quality of their releases. Now we're in 2017, and they've had a few years of coming out with super-solid games with great graphics and gameplay. Their newest title, Megaquarium, follows this pattern pretty well.

The release date for this new game is February 15, 2017, and it's expected to be available right away at Springbok Casino. This game has an aquarium theme, as you might guess from the title, and it features tons of different types of fish and other underwater life. It also has a particularly soothing type of music, so it's a sure thing that this game will fall under the relaxing category that has become a bit of a sub-genre for video slots over the past several years.

You only need two symbols, the free games symbol on the first and last reels, to get a set of seven free spins. Your wins are hit with a 2x multiplier during this bonus mode, which gives you even more value. On top of that, you'l have clown fish show up on the second and fourth reels in all game modes, and they act as 2x wild multipliers. Any winning combination that has at least one of these symbols in it will have its value doubled.

Springbok Casino is focused primarily on South African players, but they accept players from all over the world. They have a program right now where they release at least one new title each month, and on February 15, 2017, the new title will be Megaquarium. This is an impressive-looking game with very solid and relaxing gameplay, and it's sure to be a hit among players. While you might think that an aquarium-themed slot sounds a bit generic, this is definitely a case where you should try it out before you make a decision about the game.