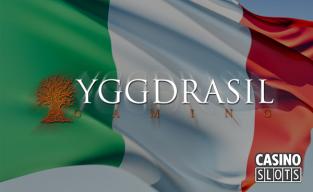 In the regulated world of European online gambling, each country has their own set of regulations and legislation that dictates how software companies and operators have to operate in order to operate under one of a limited number of licenses. To this end, it becomes very strategic in how these companies can enter and expand in specific markets. Yggdrasil Gaming has announced their intentions of getting into the Italian market, and they have a plan to make it happen.

The first thing to realize about this expansion is that Yggdrasil is looking to take both their games and their back-end tools to the Italian operator. They already have operators who run their software who have active based of players in Italy, and now they will be bringing the rest of their offering into the fold as well. This will include getting into compliance with all of the rules and regulations that the Italian regulators have and making sure that all of their tools fall under the guidelines for making further expansion easy as well.

The Importance of This Expansion

We've been into 2017 for weeks now, and Yggdrasil ended 2016 with a tremendous amount of momentum. It's very important that they continue riding that momentum and pushing to keep it going as long as possible, and an expansion into yet another major market is an excellent way to go about that. We are sure that they will have no problem with getting into Italy considering how successful they have been with getting into other regulated European jurisdictions, and we really think it's only a matter of time until they expand into other similar markets as well.

With their tools like BOOST and BRAG, this online casino software developer does a bit more than build high-quality, entertaining online slots. With BOOST, operators can craft in-game promotions that are more interactive than what you can do with titles from most other developers. BRAG, on the other hand, is an important social networking sharing tool that they developed to increase visibility, something else we haven't seen much of from their competitors. These tools are sure to be big in the Italian market and other markets that they expand into in 2017.