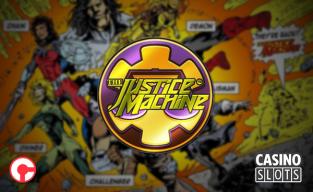 New slots are always a big deal, and the Justice Machine game from 1x2gaming is no exception. This slot is slated to come out in March 2018, and it's looking like it's going to be one of their most feature-rich titles of all time. The motif of the game is that there's a team of super heroes looking to save a city from an attack from bad guys, and they all have different powers they bring to the reels to give you extra opportunities to get paid in the process.

Meet the Team of Heroes

The Justice Machine was a popular comic back in the 1980s, and they've made a return for this game. The leaders of the group are Demon, Diviner and Challenger, and they have come together with the rest of the gang to add value to the reels and to take out some bad guys. There are several of them, and they will do things like turn enemy symbols into payouts or give you free spins.

The Justice Bonus Round

It all comes down to a big fight between The Justice Machine and the set of bad guys invading the city. You'll get a chance to fight against Megabot and all of his minions while using the different powers of the heroes and heroines in the group. The further you make it through the waves of enemies, the more money will be added to your balance in this bonus round. All of this is performed in excellent comic book-style graphics, which gives the game the perfect visual appeal overall.

1x2gaming has made this their most exciting bit of news so far in 2018. We haven't heard quite as much from them in the first couple of months of the year, and while that's unlike them, it's not that big of a deal for players. There's so much going on in the industry in January and February of each year that 1x2gaming has plenty of time to rally through the remaining 10 months of 2018 to give players a lot of new releases like this one and a lot of great content to look forward to.