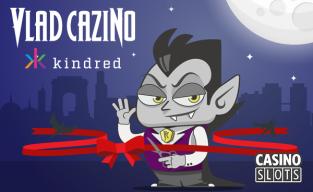 There's a brand new casino opening up for Romanian players, with the Kindred Group announcing the launch of VladCazino. The site has been designed by Kindred to appeal to a local market and is just the latest of their counrty-specific casinos.

Because Romania is the home of Dracula, the site is hosted by a cartoon vampire who will introduce the games, invite players to collect bonuses and make them feel at home. It marks the first time that a casino operator has developed a site specifically for Romania and follows the successful release of the Swedish and Norwegian Storspelare/Storspillar brands at the beginning of 2017.

The site has been developed entirely by Kindred Group, using their own platform and is an addition to their existing licensed brands, with specific features and language designed to attract a Romanian audience. It relflects the company's strategy of localising casinos to grow market share in many different countries through hyper-localised brands.

Formerly known as Unibet, Kindred Group currently has 11 branded casinos in their portfolio, catering to some 20 million players across Europe and Australia. Around 1,400 employees work for this Swedish-based operation, which is fully licensed to provide safe and secure online gambling facilities for their customers.