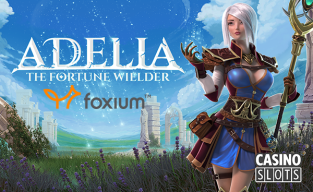 Foxium has just announced that their next slot game or release will be Adelia The Fortune Wielder, which will be a story-based game that follows an adventure through a magical land.

What We Know So Far

This 3D effect game has 5-reels, where symbols are in 3 rows and there's a total of 20 paylines, across which players will see high-card symbols, potion bottles and a staff creating winning lines. The theme is a modern twist on an old fairy tale, in which Adelia is sent by a mysterious sorcerer on a quest to find treasures. The game logo is a wild symbol that helps complete additional wins, while Adelia is a scatter symbol that awards some of the top payouts.

Adelia's Fortune Respins give players extra chances to claim a prize, which can be multiplied by up to 5x and occurs during the main game. During the special free spins round, coins are collected in a treasure chest to the side of the reels and once three have been gathered, players move up a level, where greater treasures are waiting for them to claim.

A top prize of 50,000 coins can be won in this state of the art slot, that has a specially-commissioned orchestral soundtrack and follows a popular magical topic, so it's sure to appeal to players at online casinos.

It will be released through Microgaming, so will be featured at the many casinos that use software and games from this huge operator.

Founded in 2015, in Tallinn, Estonia, Foxium has been releasing innovative slot game that are often built around a story and which come with exciting gameplay. Their range is mobile-compatible and easily integrated into existing platforms.