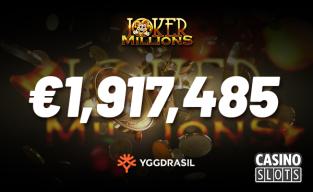 Online slot game Joker Millions, has paid its first massive progressive jackpot prize of 2018, awarding €1,917,485 to a player who was spinning the reels at LeoVegas Casino on 31st January. The unnamed winner comes from Norway and becomes the latest person to land a fortune on this popular slot from Swedish developer Yggdrasil.

It follows on from a huge win on the Empire Fortune game, which shares a prize pool with Joker Millions and awarded €1.21 million in November 2017, plus a staggering €5.2 jackpot back in July. This was the highest payment in the history of Yggdrasil, but their progressive slots all have exciting base game features which sets them apart from many others.

Nothing makes us happier than seeing our players hit big jackpots, and we are thrilled to be able to deliver another multi-million-euro prize alongside Yggdrasil.

Traditional bells, cherries, plums and watermelons appear across the 5 reels of Joker Millions, awarding prizes of up to 300x the triggering bet when the red 7 appears acorss any of the 20 paylines. Each time players get a winning spin, the symbols that made up the win will lock in place and all other positions will respin once more, repeating over and over if more winlines are formed.

If the Joker symbol triggers this feature, and the respins go on and on until this icon fills all spots on the reels, the progressive jackpot is instantly won.

This mobile optimised casino is popular across many countries and features games not only from Yggdrasil, but many other developers as well, including NetEnt, Play'n GO and Betsoft. There's currently over 700 slots, table and card games to be found there. and along with Joker Millions, players could also scoop multi-million prizes on the Hall of Gods, Mega Moolah and Mega Fortune progressive slots.