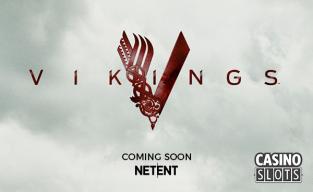 Vikings is a popular TV series that's been running since 2013 and follows a Norse clan as they invade Northern Europe. It's perhaps appropriate therefore, that Swedish casino games developer NetEnt has been the one to negotiate the rights to produce a branded slot machine based on the show.

What We Know About The Vikings Slot

Little has been revealed so far, as the licensing deal has just been announced, but we know that NetEnt plans to release the game towards the end of this year, and going on their existing portfolio, it's likely to have high-quality graphics and gameplay.

More details will be released closer to the time, and fans of the show from around the world will surely be anticipating this game.

In business since 1996, NetEnt has become one of the top suppliers of online games and their portfolio inlcudes famous slots such as Twin Spin and the record-breaking progressive jackpot Mega Fortune game.

To be able to provide our players with a different genre of branded game, showcases the hard work we’re putting in behind the scenes to create such high-quality content and further expand our portfolio