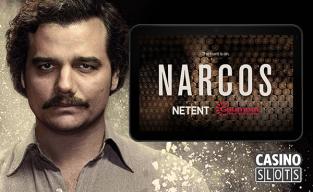 NetEnt are continuing to announce new slot games based around TV shows. Just a day after revealing that Vikings is to be turned into a branded game during 2018, the Swedish company has announced that they will also be releasing a game themed around the Narcos TV series.

What To Expect From The Narcos Slot

The deal has only just been announced, so there's no details about what the game will feature, but NetEnt have a solid reputation for crafting games with innovative bonus rounds that directly link in to the themes, and we can be fairly sure that Narcos will be created with the same care and attention to detail.

NetEnt made the announcement at the ICE Totally Gaming Show which was underway in London and is the biggest event of its kind in the i-gaming calendar, The deal is betwen NetEnt and Gaumont, the French company that produces Narcos and is behind some big films, such as The Fifth Element.

We’re continuing to push boundaries with our branded games and Narcos is certainly one of our biggest deals to date. The series became an overnight sensation with a huge fan base all over the world and it gives us yet another demographic who can have fun

Now entering its third season, Narcos is an action-packed show themed around the drugs war and is currently seen in over 130 countries around the world on the Netflix streaming service. Nominated for Golden Globes and Emmy awards, Narcos has become the most in-demand original series in the USA and is among the top five worldwide, making it an ideal choice for NetEnt to convert into a slot machine.