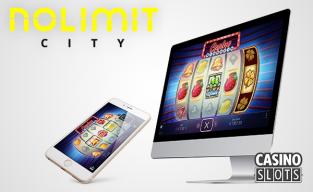 Casino Win Spin is the latest slot machine released by Nolimit City, a developer that many people may not have heard of, but they are a company to keep watching. Although this is only the seventh game from Nolimit City, it's a unique take on the traditional fruit machines of old, and comes complete with several bonus rounds, including guaranteed winning features.

At first glance, this looks like a fairly traditional 5-reel, 3-row slot machine, filled with playing card icons and classic images of fruit symbols, bells and BARs. But look beyond this and we see a game that's filled with extra features triggered when the right symbols stop across the 20 paylines. The most obvious difference is the two highlighted reel positions on the game matrix, and these are Hot Zones, which trigger a special Spin 'til You Win feature if the same symbol stops in both places.

The triggering symbol becomes an extra wild, and the reels spin until a winning combination is landed, with extra features such as rising multipliers added in each non-winning spin to help. If wild symbols triggered the Spin 'til You Win, all wilds expand across their reels.

Some Background On Casino Win Spin

Developed in HTML5, for mobile and desktop play, Casino Win Spin was released in Nolimit City partner sites on 31st January. It comes with a new interface that means players can spin the reels on their smartphones in portait or landscape, but whatever device players are on, the pin-sharp graphics and fast gameplay are always there.

With Casino Win Spin we continued refining our glossy and fine-polished graphics to create something spectacular, adding to our great portfolio of games. This high-paced machine has some thrilling features to look out for!

Malcolm Mizzi, Head of Sales & AM at Nolimit City