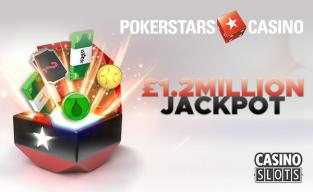 How Was The Jackpot Won?

The jackpot was claimed as the lucky punter span the reels of the Genie Jackpots slot game. This is part of Blueprint Gaming's Jackpot King series of progressive slots, although t's only recently been added, making the payout even more fortunate. This is the first occasion where a Jackpot King progressive prize has been claimed at PokerStars Casino, and the player, who has not been publicly named, is planning to use their new-found wealth to take their family on holiday, and to attend some PokerStars Live events.

The winner is a regular player at the PokerStars tables and couldn't quite believe it when they won the porgressive jackpot.

When the wheel stopped at the jackpot, I was for a split second sure that the software had frozen, But when the congratulations came up on the screen and the money suddenly was on my PokerStars account I could not really breathe or believe it. I was so h

Played over 5 reels and across 20 winlines, Genie Jackpots has magic lamps, crossed swords and a wild monkey symbol, but the highlights are the five bonus rounds, which include the 3 Wishes Power Spin. This can add wild symbols, double payouts, award a bonus feature, or trigger an instant payout of the progressive jackpot.