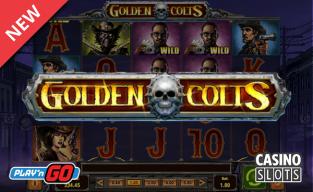 Head to a wild west like no other in Golden Colts, a new slot from Play'n GO. It's presented in a comic-book style and has an undead sheriff, gamblers, gunslingers and girls over the 5 reels and 40 paylines.

Seven bonus feaures are available, with a seven-shooter gun firing players into each round.

Exciting Gameplay In The Old West

While playing card symbols return the smaller wins when they land across any of the 40 fixed paylines, it's the strange characters who inhabit this western town that players will really want to see. An undead sheriff is the most valuable of these symbols, but there are plenty of bonus icons packing the game as well.

When the Golden Colts skull symbol stops in any 3 or more places at once, players will see the seven-shooter gun spin up any of the extra features, although these can also be randomly-awarded when the right symbols fall into place.

When the Sheriff covers all of the middle reels, a free spin is awarded, with this creepy character sticking around to help players claim big bounties.

A Gunslinger awards up to 30x the stake before a free spin. Other features include a wild bulls head that pays out high prizes and also acts as others to complete combinations. In the Gambler feature, a 2x2 Poker-player symbol also becomes wild during a reels respin, and if more examples of this symbol appear, extra respins play out.

The Ace High Gang symbol triggers 3 free spins and there are giant symbols in view that can fill reels, along with stacked wilds throughout. In the Furies round, the girl appears as a giant symbol and she sticks on the reels until players land a winning combination.

The Most Wanted feature is an interactive game that tasks players with picking Wanted posters, revealing prizes bonus rounds under each. The picks carry on, with more coins claimed, until a red X, or a feature round ends them.

Find The Features On Desktops And Mobiles

Golden Colts can be played on all devices from just 0.40 per spin. It comes with a default return to player percentage of 96.55% and like all Play'n GO games, it's fully licensed and certified for fair play.

This feature-packed slot will be launched on 26th February 2019.