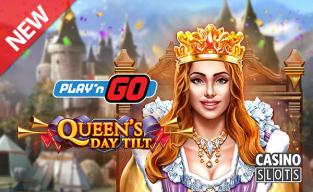 Played on a 3x3 grid of symbols, Queen’s Day Tilt is a new slot game from Play ‘n GO that takes you back to the olden days, where knights are jousting for Royal favours. A cascading reels feature can see multiple wins from a single stake, while a special free spins round sees rising multiplier payouts and the smiling Queen is a wild symbol.

Join In The Festivities

Queen's Day Tilt is set on the jousting field, with a magnificent castle rising up behind this scene. Smaller payouts are claimed when the 2 or 3 heart, club, diamond or spade symbols land across the grid, either horizontally or vertically. Higher prizes are won with symbols of knights.

A cascading reels system sees winning symbols disappear and new ones drop down to fill the empty spaces. The can go on and on until no winning combinations are seen.

The Queen can grant players with extra wins in The Ruler feature, appearing in the grid to complete combinations for you.

If the whole 3x3 grid is filled with winning symbols and they all disappear at once, 5 free spins are awarded. During these bonus games, a rising win multiplier is in effect when you land knight symbols in a row. The first win in a sequence will be doubled in value, with the next tripled, and so on.

A Game of Succession feature is also triggered by either the red or black knights. It’s a free respin, where only high-paying symbols will appear. Players will first have to decide which knight will form the most winning combinations in the respin, winning a 2x multiplier if they get the right one.

If both knights create an equal number of wins, the reels respin again and if the chosen knight loses, prizes are paid at the flat rate.