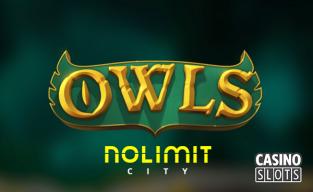 NoLimit City has continued with its mission to bring many more games to online and mobile casino sites in 2019 with the launch of Owls. This 5-reel, 15-line game uses stunning graphics to bring a tale of warriors protecting their kingdom to life.

Immersive features include Frozen Dream, Ember Dream, and Emerald Dream rounds, with extra chances to claim prizes in each bonus.

The outstanding visuals transport players to a mythical realm where the owls have been granted to powers of nobility, strength and wisdom. Among the valuable symbols, players will find a wild, that acts as others if needed. A Scatter Loot feature fills the middle reel for a big payout. Extra wilds are also added in this in-game bonus. Land scatters on the middle 3 reels at once, and the main free games rounds are triggered.

Stacked wild symbols will fill the middle reel during the free games. But Owls awards players with any of 3 features. The Frozen Dream games will see 5 free spins play out, during which Frost Sword, Frost Shard and Frost Owl symbols can transform into each other. Whichever Owl is seen in the most places is the one that the others will turn into.

If the Ember Dream spins are triggered, Flame Chest and Flame Shard symbols transform into extra wilds. The Emerald Dream feature sees Emerald Shard and Emerald Book symbols turning in to the high-paying Grove Owl, helping players to collect some of the top awards.

Fly With The Owls

Owls is launched on desktop and mobile platforms on 27th February 2019. It's a medium-volatility game that comes with a generous return to player percentage of 96.22%.

Malta and Stockholm-based NoLimit City are on a roll, with Ice. Ice, Yeti and Dungeon Quest being some of the biggest recent launches.

''Owls has been a delight to work on, from the first concept to the super-polished finished product! This game has something for all players; great theme, feature-rich content; and a sweet win vector for payouts.