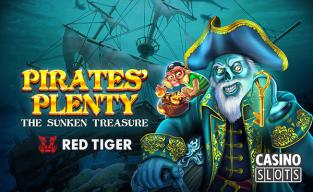 The latest slot from Red Tiger Gaming sets the action on board a sunken ghostly ship. Pirates' Plenty has players searching for treasures across 5 reels and 20 paylines. Extra booty can be plundered when the bonus rounds are triggered. These include a wild monkey symbol and a special sixth Treasure Reel that blasts winnings across the game.

Pirates' Plenty can be played on desktop PCs and mobile devices from just 0.20 per spin, to a maximum of 100.00. The haunted ship rests on the bottom of the sea and is filled with symbols of coins, playing card suits, rum, pirate hats, and cannons.

In the base games, a monkey can steal symbols from the reels, leaving spaces for new ones to fall in to.

As players land map symbols, they get closer to unlocking the Treasure Reel. Once it has been activated, extra wild symbols will be added, and these multiply wins by up to 5x.

Any 3 or more scatter symbols will trigger 10 Ocean Free Spins. During these games, 3 treasure chests will be seen above the reels. Unlocking chests will add extra wild symbols and at the same time remove a low-paying symbol from the mix. If all chests are opened, all card symbols turn wild and 5 extra free games are added on.

This high-volatility game has a return to player percentage that averages out at 96.12%. It's presented in a portrait mode to perfectly fit a mobile smartphone screen.

Red Tiger Gaming was founded in 2014 and has quickly grown to become a major developer of slots and casino games. A bespoke progressive jackpot system and the flexibility to play on all devices are just some of the reasons for the increasing popularity of the company.

''Players can enjoy real progress with Pirates’ Plenty with more spins giving them more pieces of the treasure map in order to unlock the sixth reel. More than that, I think they will enjoy the varying volatility, which changes as the game progresses.''